Camping in bear country is a topic that makes many new campers very nervous and can keep a lot of people from camping in the wilderness. With a bit of bear safety education, there’s no reason to be scared of bear encounters while camping.

With these tips, staying safe in bear country is easy to do.

The first topic to discuss when it comes to bear safety is knowing the difference between black bears and grizzly bears.

The biggest difference in appearance is that grizzly bears typically have a hump on their back, a concave “dish” face, small ears and long claws.
If you are camping in grizzly bear territory, you must learn how to identify them.

Grizzly bears can be more dangerous but are rarer than black bears. Fortunately, grizzly bears are only found in the states of Alaska, Wyoming, Montana, Idaho, and Washington, in the United States.

When camping outside the above mentioned states you only need to worry about black bear encounters.

The behavior of these bears is very different, and your response to an encounter will depend on the type of bear you are dealing with.

Bear Safety at the Campground

The number one reason for bears in campsites is campers providing a food source through improper food storage. There is a saying that “a fed bear is a dead bear” which means anytime humans allow bears to get a hold of food, it will inevitably lead to that bears euthanization.

Your number one job as a camper in bear habitat is to make sure that no bears (or other critters, for that matter) have access to your food. This includes crumbs, wrappers, and paper plates with residue.

It also includes things you may not think of as food, such as candles, lotion, Play-Doh, and dog food. Anything scented can attract bears to your campsite. It’s estimated that a bears nose is 100 to 2000 times stronger than humans, meaning they can smell food from very far away.

If you are camping with kids, you need to exercise extra caution to manage all of the crumbs that may end up on the ground after dinner. Food storage is very important, and the approach will vary based on location.

For most of us, locking up your food in the car (or provided storage bins) for the night is good enough, however in places like Yosemite, bears have been known to break into vehicles, so more stringent requirements are provided at those campgrounds.

There is at least one campground at Yellowstone that has so many bear issues that they do not allow soft-sided campers or tents. Be sure to check the regulations before making any reservations.

Bear Safety in the Backcountry

All of the same principles of bear safety apply when you are backcountry camping, only you don’t have a car to store your food in. In some heavily frequented areas such as the Glacier National Park backcountry, designated campsites will have either a bear pole or a bear box where you can store food and any scented items overnight.

Otherwise, it will be up to you to hang your food. This takes some practice as bears are quite tall when they stand on their hind legs and they can climb trees, so be sure to research the best way to hang a bear bag in the area you will be camping.

I prefer to use something called a Bear Vault, which is a small plastic tub that is indestructible. Rather than deal with hanging my food at night, I can seal it all up and place it someplace a ways away from camp.

If you follow a safe camping protocol, then a bear encounter at your campsite is unlikely. However, chances are, you will also be out hiking during your trip and should do your best to avoid a bear encounter on the hiking trail.

Making noise while hiking is the best way to avoid surprising bears along the trail. Some hikers wear bear bells, but my recommendation is to not hike alone and just carry on a conversation with your hiking partner.

If I’m hiking near a noisy stream, or through high brush where visibility is poor, I will yell out “hey bear!” every once in a while. So far, it’s worked.

I would NEVER hike alone in grizzly territory and always carry bear spray. You can carry bear spray for peace of mind elsewhere, but I don’t worry too much about black bears.

If you still find yourself in a bear encounter, follow these steps to avoid this turning into a bear attack.

Why is it a bad idea to run from a bear?
Running from a bear can trigger a chase response because it may view you as prey. Because bears can sprint up to 35mph over short distances you should never run from a bear unless you are within seconds from a safe space or escape route (cabin or vehicle.)

Now, if you follow these steps and the bear decides to attack, your reaction will depend on whether you are facing a black bear or a grizzly bear. Again, this is a very rare occurrence that is unlikely to happen, especially if you are carrying bear spray.

If you are attacked by a black bear, you should fight back as hard as possible. If necessary, hit the bear, focusing on the face and mouth. Use rocks or nearby objects, but whatever you do, do not play dead.

Black bears are not typically aggressive bears; they are a lot like dogs, they will make a lot of noise when they feel threatened, but ultimately will give up if you fight back.

If you are attacked by a grizzly bear, then you should play dead. If needed, curl up in a ball to protect your vital organs, and if you are wearing a pack, keep it on to add a layer of protection.

Grizzly bears generally don’t attack humans as prey, but to protect their cubs or their food. If you play dead, the “threat” is eliminated and the bear will generally amble away.

I realize this all sounds quite scary, and the first dozen times I camped in Colorado, I ended up sleeping in my car because I was so nervous about bears.

Over time, I became more confident in my own skills, and now have no trouble sleeping in a tent in bear country. In fact, I spent a whole week tent camping solo with my dog in Colorado last summer; we didn’t see any bears and I didn’t lose a wink of sleep!

What are your biggest concerns when camping in bear country? 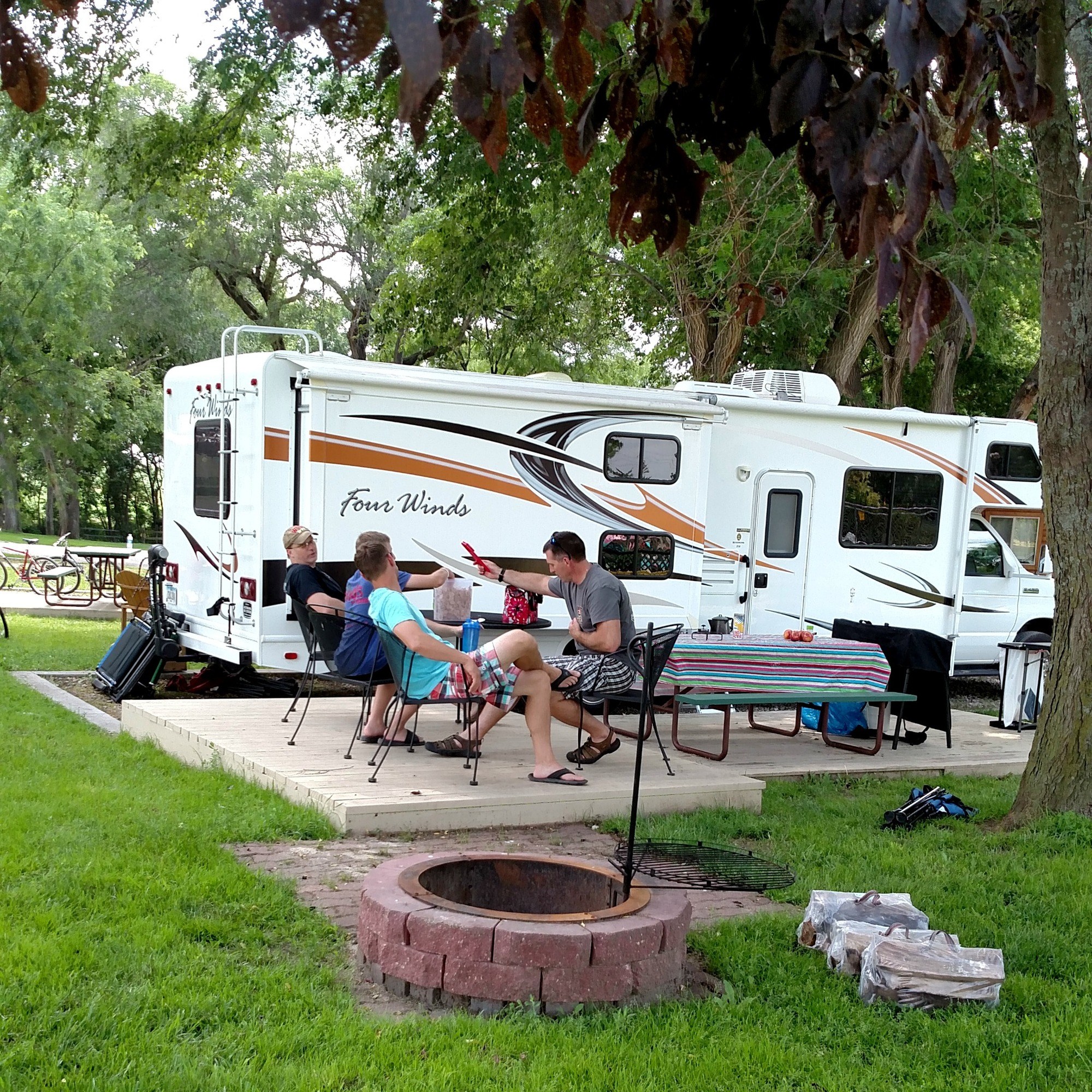 Last Updated on August 31, 2018 by Jody I have always thought of camping as a family event, even though as an adult, I mostly camp solo on road trips with my dog. Growing up, my best friend’s family was really into camping, and many of our summer weekends in junior high and high school… 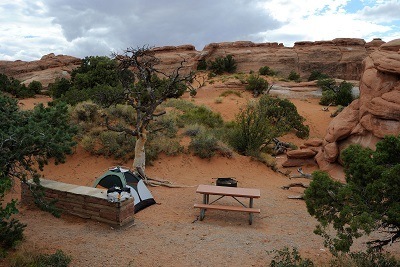 National Park camping doesn’t have to mean sleeping on the ground, eating charred hot dogs, or forsaking showers for a week. Those are all options, though! There are many different kinds of camping within the National Parks, from backcountry wilderness camping to “glamping” in a cabin or yurt. Here’s what you need to know about National Park camping sites. 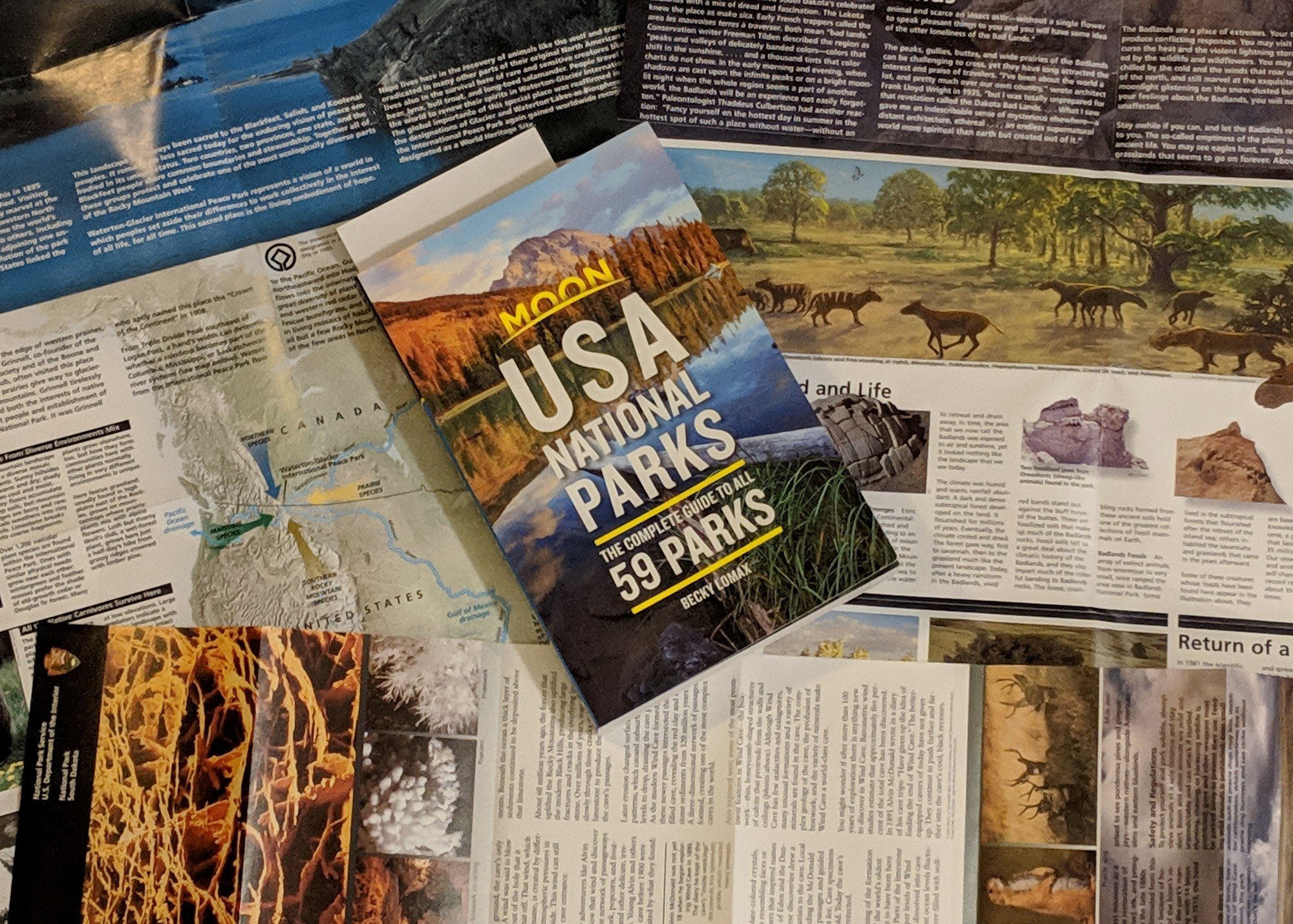 This thorough book is a perfect companion as you plan National Park vacations.
The stunning images will excite the adventurer in you, and the useful tips, along with the ‘must do’ activities and attractions, are a perfect beginning point to work from as you plan your National Park Travels. 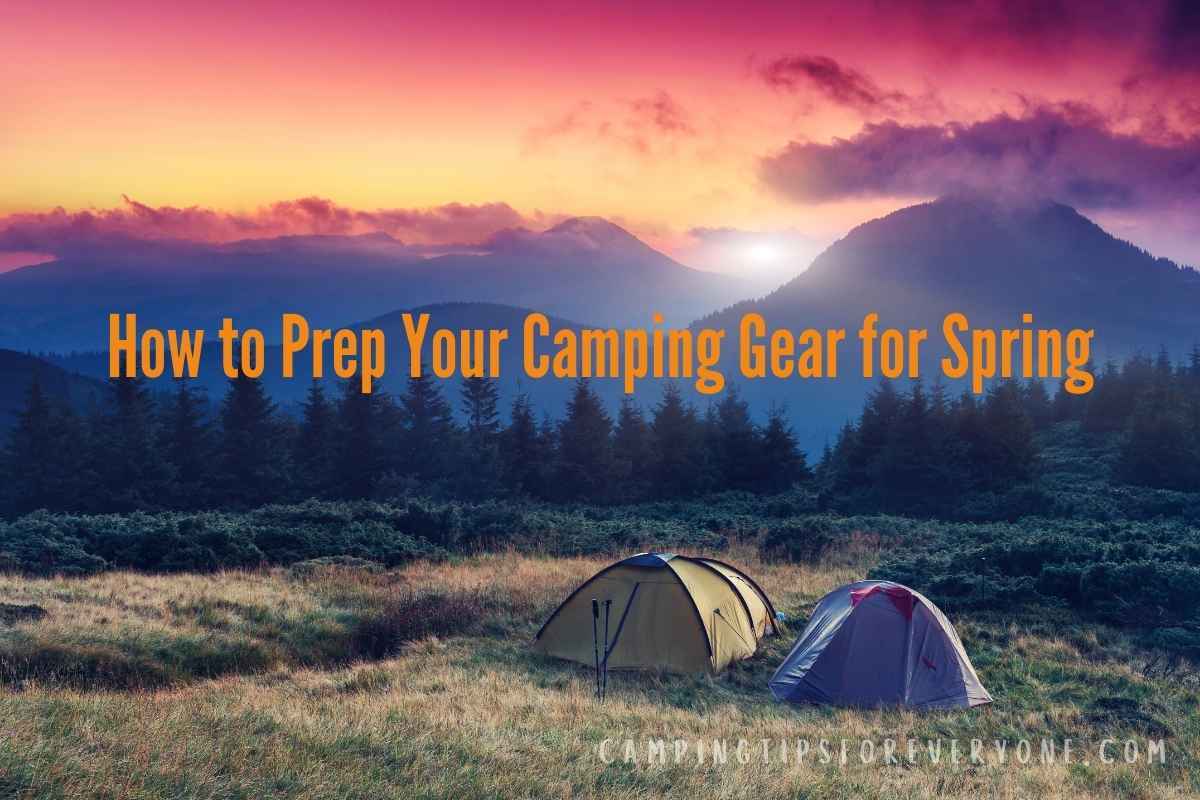 Last Updated on March 30, 2021 by Jody Camping season is just around the corner, and many of us campers are starting to come out of hibernation. If you followed my tips for storing your camping gear over the winter, then all of your gear is safely stowed away, and it’s time to start getting… 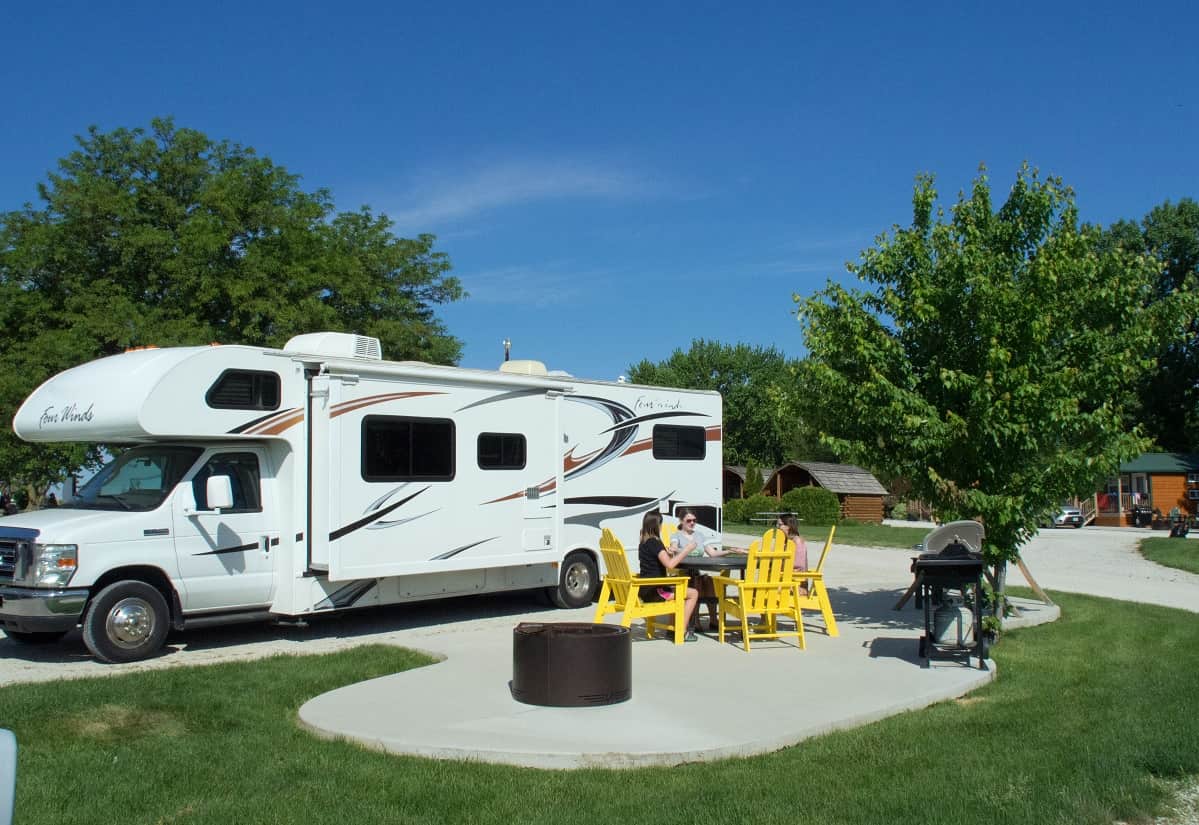 Last Updated on April 24, 2021 by Jody This is it! You are ready to plan your first RV vacation! But where do you begin? Who do you rent from? And how do you make sure you are getting the RV that is right for you? My advice is to begin with RVshare to rent… 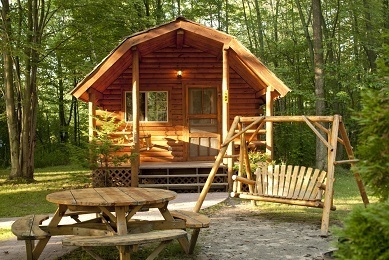 Last Updated on April 27, 2021 by Jody I love cabin camping especially when it’s in the woods. As a child, a cabin in the woods was my first experience with wilderness camping. My family is lucky to have access to a 90-year-old cabin in the woods in Norway. It looks like the rustic cabins…

This site uses Akismet to reduce spam. Learn how your comment data is processed. 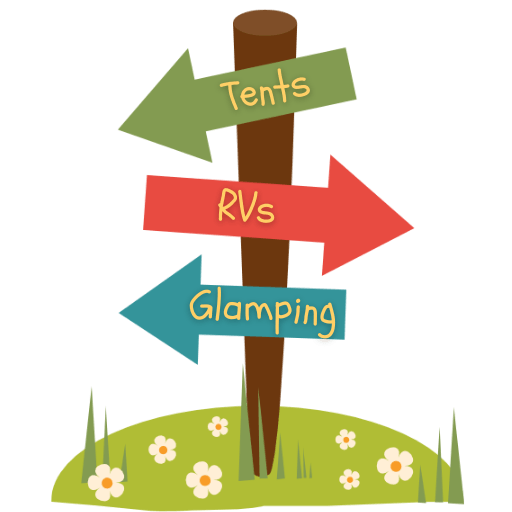 Whether you’re an experienced camper, a total novice, or somewhere in between, we’ve got everything you need to plan the camping trip of your dreams – and if we don’t, just ask! We have some of the most experienced campers just waiting to answer all your questions!!!